Super glued my Super glue
By Chunsheng Nie
I left this glue on my table overnight, loosely capped, and found the glue glued to my table... permanently. It has now been a year since it got stuck and it is officially part of the table. Great decoration. My colleagues and I have tried many means to get rid of the glue, mainly just prying at it (ouch, our fingers), poking at it with chopsticks (our chopsticks are dulled), cutting at it with knifes (I think the knife is bent), lathering on nail polish remover (my table is flooding), sawing at it with string (the string broke in half), and getting the glue stuck on our fingers, which took quite some to get off. We managed to twist the bottom part off (Which was still wet and workable even after a year, really great quality guys. Good job. It spilled right away and we were wiping away at it like our life depended on it). When we try to pry it off with our fingers or string, it lifts the table up as well. The force of this glue is greater than the weight of out table..... wow. As glue, it's served its purpose wonderfully. As a decoration, it has also done it's purpose.

Ok, no, srsly, this actually happened tho. how do I get it off T_T

Works great on rubber or fabric! Best quality of the super glues in my opinion!
By Jeri Zerr
Over the years I've tried many different "super glues", the Loctite has always seemed to hold the best with fewest issues. I needed to glue the soles of several Nike jogging shoes - they just don't make them the same anymore. The Loctite worked perfectly, all the spots of pulling apart tread seemed to hold well within a few minutes. The Loctite goes on very thin without squeezing the bottle so be careful of runs.

Cyanoacrylate. For Metal, Wood, Leather, Rubber, Paper, Ceramic, and Plastics. Claims to work on even "hard to bond acidic surfaces." States not for Styrofoam, foam, foam rubber, polyethylene, nor polypropylene.

Per the instructions, press parts together 15-30 seconds. Try not to disturb at least 10 minutes and a full cure is had in 24 hours.

NOTE: The package states if fingers are glued to use cooking oil and gently rock or peel the fingers apart - DO NOT PULL - as presumably this could rip the skin.

Loctite Products Customer Service is 800-624-7767. Made in Ireland for Henkel Corporation.

Best Super Glue Ever!
By Allen G. Lough
This is the strongest, longest lasting super glue I have ever used, and I have used a bunch of it! The applicator tip doesn't get clogged, the glue lasts for at least a year after it has been opened, and it seems to create a stronger than average bond compared to other brands. Also, there is a generous amount in the 20-gram bottle, making it a very economical buy compared to the tiny bottles offered by others. Try it; you will love it, too! 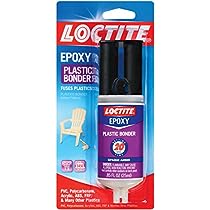