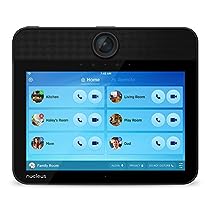 Availability: Usually ships in 24 hours Ships from and sold by Amazon.com
Product Description

We live in a world that is “hyper-connected”. Despite this, we still don’t get to spend enough time with the people who matter to us most. That's why we made Nucleus. We keep it simple – a tablet-sized screen you can plug in anywhere in the house (and even connect to with a mobile app) – and that's how we make magic. Nucleus brings families closer, so that you can spend quality time with those you love – wherever they are. Nucleus brings you home.

THIS MAGIC MOMENT
By Scottydb
I've been looking for a video intercom but unlike some of the other people who have written in about this, I'm not primarily motivated by the intra home use but rather inter-home use (home to home and mobile to home). The first motivation for me was to have a device that was dedicated to video chat making it easier to use than the ipad which requires too many steps to get to facetime. It was primarily for my grandmother who lives 45 mins away and we don't get to see her often enough. I bought her an iPad and it just doesn't work for her. Too many permutations and complex interfaces for her. When I heard about Nucleus I was hoping this would be a solution. Then I also had a first child and she's obsessed with chatting with grandma (out of country) and great grandma (out of town) via facetime but that means I always have to be there to make the call happen. Again I was hoping that Nucleus would be the solution to giving my kid a child-proof solution to communication with our extended family.

Grandma loves it because I was able to set it up as if its in the same home and she doens't even have to do anything ... i put it in her livingroom and when I dial (turned privacy off for that room) and it just turns on and my daughter gets to chat with her. You really feel like you're just there! It also gives me a little comfort those times when I call her and she doesn't answer the phone and I get worried. At least like this I can peer into her livingroom when I'm concerned and see whats going on. I know this may sound creepy but my grandmother is also super excited about it and totally bought in.

It is clear that this is a first release though and so there are a couple of minor things that I'm certain they'll fix pretty quickly based on what I've been told by the really responsive and kind customer support team. Those issues are: video can be a bit dark when backlit, some wonky/annoying interface issues (like asking me for my password multiple times when I try to modify some settings), the mobile app doesnt work when its running in background, a couple of minor hiccups on initial set up on the software side that were resolved just by rebooting.

Its pretty clear to me that this device is going to make a big difference in my family's connection and that this can only get better. Really psyched to see what else they're going to add on top of Alexa too.

Smart WiFi-enabled Intercom Works Well
By Mark Kantrowitz
I bought six of the Nucleus intercoms, one for each bedroom, one for the kitchen and one for the home office. I am planning on sending one to each set of grandparents when they are back in stock.

I got the Nucleus intercoms partly because they looked like a really cool gadget and partly because they solved a problem with my current house. My house does not have a built-in intercom system, even though it is wired for whole-house audio and CAT5.

That left RF-based wireless intercoms as the only option, but these haven't worked well for me in the past.

The Nucleus intercom solves my problem by offering connectivity through both WiFi and wired networking.

Installation was pretty easy. I swapped out the wall mounts for the stands, because I haven't figured out the placement yet. The software configuration was straightforward. After choosing the WiFi network, which was a little sluggish, you're given the option of creating a Nucleus account or adding a new intercom to your home. You need to create a Nucleus account with your first intercom. You'll then receive a Home Code by email that you can use to add subsequent intercoms easily. (You will need to approve the addition of each intercom by clicking on a link in an email message that is sent to you as part of the setup.)

Installation on my mobile phone was easy. There's an option to send an email message with instructions to your phone (no texting option, unfortunately), but it gets wedged if you use the same email address used to create the Nucleus account. You actually don't need this email message. Just download the App from the Apple or Android App stores and use the Nucleus account and Home Code to add it to your intercom network.

The video on the Nucleus is a little dark because the rooms in my house have room lighting on the ceiling in the center of the room, so your face is backlit when you use the intercom. Turning on a lamp near the intercom seems to fix this.

Alexa is a nice bonus. We already have an Amazon Echo and two Echo Dots, but the Nucleus gives us Alexa throughout the house.

There are a bunch of minor issues, such as the inability to page a group of rooms (e.g., to tell the kids to come downstairs for dinner) and the inability to schedule the Do Not Disturb mode during sleeptime. But, I expect the software will improve over time, just like Alexa.

After much wait, 80% of what we were hoping to see in this product.
By Matthew
(Note I am not being paid for this review nor did I get my units for free). We have been waiting for these intercoms for several months ever since we wanted to update the intercoms in our home. After an exhaustive search for video intercoms, Nucleus seemed to be the most powerful at the best price. We just picked up our first two intercoms to try them out and right now we are extremely impressed.

1) Installation/Setup: Taking less than 5 minutes to setup the units we were off to the races. Plugging into a wall outlet (later I installed on the wall and connected to the PoE ethernet cable we pre-prepared). Unit asked to join wireless network and quickly updated its software, walked through a handful of setup screens and that is it. The mounting bracket was trivial to install and props to the team for including a small level which saved me from having to grab ours from the garage.

2) Alexa: Initially I was very impressed and pleased with Alexa. A very easy way for us to get the power of Alexa in every room. After playing with this for a few hours I was a little disappointed that Alexa seemed sluggish to respond and a couple of times I could not get the unit to stop playing music I was streaming without rebooting or getting up and using the screen to stop the music. I was also equally surprised and disappointed that some of the intelligence of Alexa was inaccessible with Nucleus. For instance, you can't ask Alexa to play your Pandora stations.

3) The second unit got stuck in a software update loop. Continually updating software multiple times. I cycled power and it instantly came back. Small glitch, certainly not a deal breaker.

4) The intercom system was exactly what we expected. Making a call between rooms was quick and easy via the touch screen. Still not sure if we are supposed to be able to do this with just audio commands, but touch screen was easy and intuitive. In the future small recommendation to allow the camera to tilt depending on where the unit is mounted in the room to perfect the view, but for now the wide angle lens provided a pretty darn good view of the entire room.

Overall very impressed with the entire system. I am sure there will be improvements in the software but as a unit was very impressed.