Shutter RenuTM- Cleans and Restores 24 Vinyl Shutters. Makes them beautiful like new for less than $3.5/shutter. Easier to apply and longer lasting than paint! 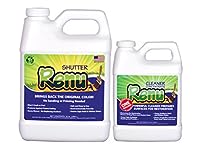 Availability: Usually ships in 1-2 business days Ships from and sold by Shutter Renu
Product Description
Restores Color, Shine and Beauty to your Shutters, Siding, Garage Doors and Much More OR YOUR MONEY BACK. We Are So Confident You Will Love Our Products We Put A Money Back Guarantee On All Our Restorer Technologies. That's How Confident We Are You Will Love Our Products. With Shutter Renu And Vinyl Renu Your Home Will Never Look Better. Restore The Color, Shine And Beauty Of Your Shutters, Siding, Doors, Patio Furniture And Nearly All Of Your Outdoor Items. Shutter Renu And Vinyl Renu Will Not Only Make Nearly Everything Outdoor Look New Again They Will PROTECT your Shutters And Siding From Future Fade And Color Loss For 10 Years. Guaranteed!. Your Time And Money Are Valuable. IF YOU ONLY CHOOSE THE BEST. Choose Shuter Renu and Vinyl Renu. Shutter Renu and Vinyl Renu Maximize Both Your Time And Money. Both Have The Latest Aerospace And Marine Grade Technology Making Them The Only Product That Lets You Restore Only Once Per Decade. Shutter Renu And Vinyl Renu Will Improve Your Home's Curb Appeal And How You Feel About Your Home Every time You Drive Up The Driveway. So Restore Color, Shine And Beauty To Your Faded Shutters, Faded Vinyl Siding, Faded Garage Doors, Faded Patio Furniture, Faded Front Door And Most Of Your Outdoor Items. Developed and Manufactured In The USA By Real Scientists. Shutter Renu And Vinyl Renu ARE THE ORIGINAL And Have Restored Color, Luster And Beauty To Over A Million Square Feet Of Outdoor Surfaces. They Are Also The Only Restorer Tested, Used And Recommended By Vinyl Shutter And Siding Manufacturers. Now Available On Amazon. This 24 Shutter Kit Will Make At Least 24 Standard Size Shutters Look BRAND NEW. A standard size shutter is about 14"W x 42"H
Product Details
Product Features
Customer Reviews

Absolutely unbelievable improvement
By Cassandra
If I hadn't seen this with my own eyes, I wouldn't have believed it. My house has cranberry-colored shutters without louvers, and they were 11 years old and badly streaked with oxidation. Cleaning the shutters took some time until I developed a system. I'm not sure how effective the cleaner is. It didn't seem to do much until I used the 5 to 1 dilution recommended for stained shutters and combined it with a steel scouring pad from the local dollar store. The recommended soft brush and solution wasn't making much progress. The instructions say to clean the shutters until scraping them with your fingernail produces no result. It took me two or three washes per shutter to achieve that. At this point, the shutters looked only a little less dreadful than they did when I began cleaning. Once they dry completely, you "paint" them with Shutter Renu. This part is simple and took less than 15 minutes per shutter. Each shutter uses less than a quarter cup of Shutter Renu. The trick is to use a larger brush and load it with a tiny bit of the solution to minimize foaming and frothing in the corners. A little goes a loooooong way. At first, the shutters looked almost purple. They dried to touch in 30 minutes, and VOILA! They looked like they'd just come out of the box, even restored to the original color. I expected to see more fading, especially since reds tend to fade so much, so I was shocked at the restoration. Our neighbor wandered over to take a look and was equally impressed. I can't speak to the longevity of this system yet, but it supposedly lasts up to ten years. If I get even five years out of this treatment, it's worth it. For less than the cost of a pair of new shutters, not to mention the annoyance of replacing them and the waste of ditching shutters every ten years, I have beautiful shutters again that give my house a real facelift. My jaw literally dropped when I stepped back to take a look after application. This product completely solved the problem at my house!
Update: Eight months later, and the shutters still look as beautiful as the day I Renued them. They were so pretty for the holidays!

Best thing for faded shutters
By Slacker554
My shutters started out a dark brown and in 8 years faded to tan. I was going to paint them but saw this product. I pressure washed the shutters first which removed a lot of chalkiness then brushed on this product and they looked new again! Not sure how long it will last but easier than priming and painting!

It Works, But You Must Give Particular Attention to the Foam
By Greg Farrar
Clean the shutter and apply the Shutter Renu as per the directions. The results you were hoping for will be there. Your shutters will shine and the grain texture will pop out at you.
However, there is some additional work you must be aware of. The directions say to avoid foaming and this should not be taken lightly. You need to be very careful about removing any foam buildup that remains on the shutter in the corner or anywhere else because the foam will dry as is and will look like dried spit on your shutter. Definitely apply the second coat as instructed and then go over the shutter with your brush and clean up any heavy concentrations of the liquid and work the foamy buildup out of the corners, edges, and around the mounting buttons. Also, don't let it run and dry. You will not like the result.
I had 22 individual shutters and bought the 18-24 kit. I just got into the 2nd container for the last 4 shutters, so I needed it, but I have a lot left over. The 32 oz of Cleaner goes a long way at 10 to 1 concentration. 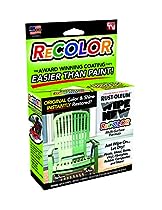