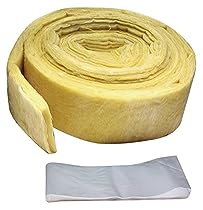 Useless
By User
I thought that a thick piece of insulation like this with its own moisture barrier was perfect for my needs. Unfortunately, the description is incorrect and the product is pretty much useless. First, and most importantly, the wrap is NOT half an inch thick. When it's straight out of the package and completely fluffy, it's not even a quarter of an inch thick, and once you wrap it around anything, it's probably not even 1/8th of an inch. In fact, it's so flimsy that when you put it around something, thin spots will appear which you can see the pipe through.

The "moisture barrier" is likewise cheap and useless. I was expecting the fiberglass to already be in plastic and thought "I won't get fiberglass all over me!" but it's literally just square scraps of loose plastic that aren't wound up in any logical way so you have to tear up the entire thing to find the end. You then have a 5 foot streamer that you have to feed through and around the fiberglass wrapped pipe, which is likely somewhere where you can't fit your hand through to grab the end. It's so narrow and thin that it's next to impossible to lay it out evenly, so you'll end up with wrinkles and gaps which mean moisture will get through the moisture barrier.

The other problem is something that I probably should have realized and they spend one line talking about on the back of the packaging if I had read it more carefully. This "25 feet" of insulation won't cover anywhere near that length of pipe once it's wound around it. They specify that you need to wrap it loosely (probably so it doesn't just rip) and overlap it by half the width every turn. Supposedly, one package will insulate 10 ft of 1 inch pipe but you'll be lucky to even get 7-8 feet out of it. That means you have to buy 2-3 times what you expect (hopefully of a different product) so plan ahead for that and don't come up short like I did.

Overall, I think I should have just bought a sheet of insulation from the hardware store and cut it into strips myself. It would have been thicker, cheaper, easier to wrap in sections, and I could have bought a drop cloth to cut up like they did to cover it with. Hindsight is 20/20 though, and it's too late for me. Hopefully this will be useful for someone else looking at doing the same thing and save some stress and frustration.

Easy To Use
By RobinNestFlorida
I bought this to wrap the pipes around my exterior water tank. The pipes froze once, and I never want that to happen again! I applied this in the fall and it took me through the entire winter - with several hard freezes - and the pipes came through fine. Since the pipes have several joints, and the connections for the pump motor and other things, this was ideal for working around all of the various nooks and crannies and curves and turns. The plastic cover protects it from the weather, which was exactly what I hoped it would do.

Not what I expected
By Duane C. Byrne
I purchased this to cover the MD- Heating cable which i am using on exposed pipes in my crawl space. I was disappointed in the thickness and strenght of the product. It would tear as I was tring to wrap it around the pipe.